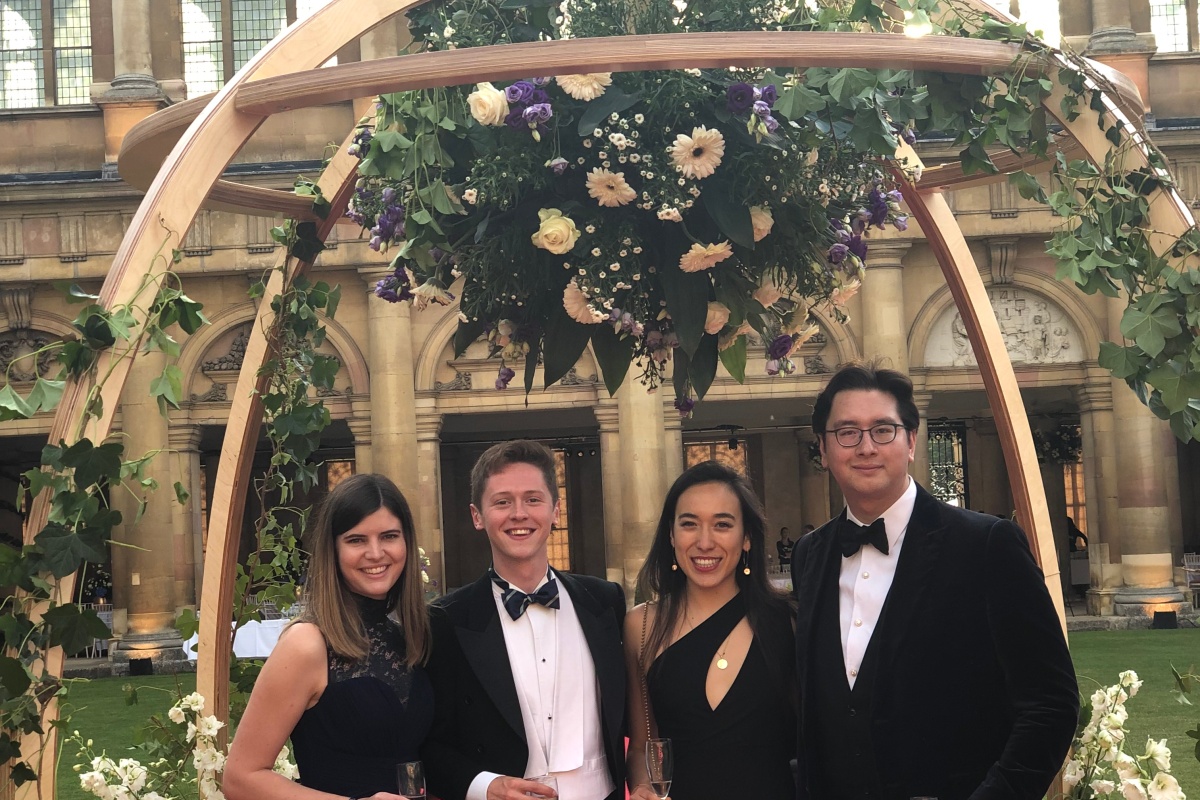 I kicked off May Week by attending the Trinity May Ball on Monday June 17th. It was a spectacular night, exemplifying how to do a fireworks show right. Before I get ahead of myself, let me start from the beginning – dining.

Conor and I decided to go for dining tickets because we thought our chances would be better than if we tried for the general pool (it’s almost impossible to get tickets to Trinity if you are not a Trinity College member). Our strategy paid off and we were able to snag two sets of dining tickets! We invited along our Oxford friends Ben and Seline to join us. The night started with a champagne reception and photographs before moving into the hall for dinner. The dining option is always tricky because it means you could be too full to take advantage of the food stalls offered at the Ball and the food could be substandard to what one would expect for paying so much extra. However, Trinity DELIVERED on their dining option. I was blown away by the six course meal, as was everyone around me. The dessert particularly was displayed wonderfully and was incredibly delicious. I know I am overusing adjectives here, but I cannot describe the tasty dishes enough.

After dining, we had a second champagne reception. The line for oysters was still ridiculously long so we skipped that part, much to Conor’s dismay. We made our way to the riverbank to watch the fireworks show at 10:30pm. It was a shocking sight to see the river filled with punts, people spilling over into each other, pissed and having a great time. The punt companies hire out their punts for a pretty price to community members who want to see the fireworks show up close. A few particular rowdy men thought they would be cheeky and make a break up the bank for the party, but were quickly tackled to the ground by security. The crowd loved it!

The fireworks show was possibly the best part of the night. It was timed to music, ranging from the Greatest Show (apt) to Coldplay. There were fire cannons that kept time to the beat and an incomprehensible number of fireworks. Of course, the John’s committee were watching from across the riverbank to see what they would have to beat the following night at their ball.

Trinity offered a range of food and drink stalls, along with a ton of seating options – something many people took advantage of. One of the cooler seating options was igloos – clear plastic frames that unzipped with pillows and blankets inside for those who wanted to rest for a bit. They were packed the whole night. I enjoyed the Willow Bar the most because of it’s somewhat secret garden-esque feel – walking through the willow branches before happening upon a cocktail bar lit up with twinkle lights.

The headliner – Becky Hill – was a smash as the main stage tent filled when her set began with students screaming the lyrics and girls being hoisted on to shoulders. She was a fun, hype live act. While I only knew one song, I still had a great time dancing along to the rest of her music.

One thing that did disappoint were the fair ground rides. There was one which was a spin on a ferris wheel – people were strapped into cages that went upside down while also going around like a ferris wheel. Conor and I waited in line for about twenty minutes before the people coming off the ride started saying it was not a good time and not worth the wait. We quickly exited the slow moving line and headed to the dessert tent.

My favorite food stall was the Yubba Yubba donuts (throwback to the Keble Ball review!). As always, there were warm and delicious – the perfect snack at 3am.

All in all, I was very impressed with the Trinity May Ball, as I expected to be. I think it would have been more fun with a larger group of friends, but with the tickets difficult to come by, this is not always possible. Other than that, Trinity had everything on offer to make the night spectacular. I will definitely be on the lookout for tickets in the future.